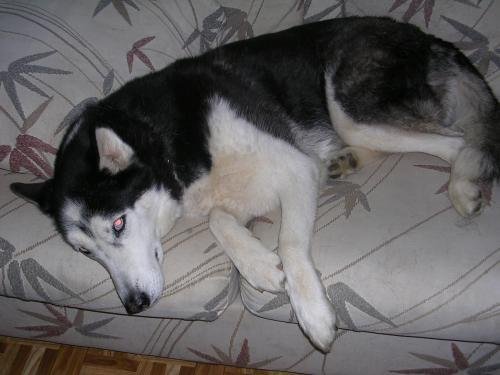 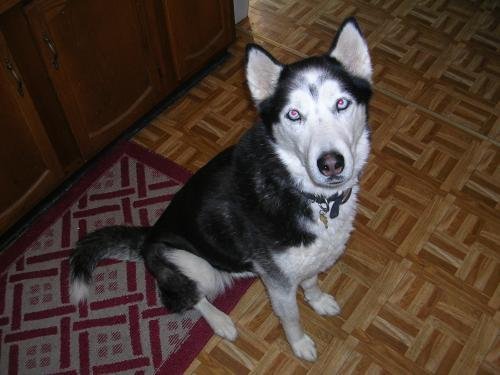 This pet is no longer available for adoption.

COURTESY LISTING. THIS DOG IS LOCATED IN NJ Per her foster dad: Snow is a 3 yr old female siberian husky. appx 45-55 lbs. Black and White coat with Blue/Grey Eyes. Probably spayed. Shots not updated. She is house trained but still has occasional accidents. Never been in a crate since IÃ¢ÂÂve had her. She is okay with dogs but can get jealous and sometimes angry if other dogs are getting more attention than her. Not good with cats. SheÃ¢ÂÂs never been around small children since IÃ¢ÂÂve had her but she is very friendly with new people. She spends time inside and outside but always sleeps outside. The longest I have ever had to leave her alone is 8 hours. She can be quite the escape artist. HISTORY: I first met Snow is the summer of 2003. I was currently living in a fraternity-style college house with seven other of my fraternity brothers. My roommate at the time really wanted a dog and foolishly bought Snow off of a private owner who sold her to my roommate for $55. Supposedly they already had a dog that was much older (Snow was 1 1/2 then) and the two of them didnÃ¢ÂÂt get along. During that Fall 2003 semester, my roommate failed out of school and had to move home. He couldnÃ¢ÂÂt take snow with him because his parents were very allergic to dogs. So I was basically left with her. I had had no previous experience having a dog so I didnÃ¢ÂÂt know what to dog. I continued to feed her and walk her and love her but she never had a single vet visit or shot since IÃ¢ÂÂve had her. IÃ¢ÂÂm just a college kid I canÃ¢ÂÂt afford that stuff and it wasnÃ¢ÂÂt my decision to get in the first place and my former roommate was of no help. I have since moved out of that house and now live in a townhouse apart with 3 other guys. Snow lived with us here from May 2004 until August 2004. It was great for her because this house had a fenced-in back yard for her while the other house didnÃ¢ÂÂt. One day our landlord came over and found out we had a dog when it specifically says in the lease Ã¢ÂÂno pets allowed.Ã¢ÂÂ Luckily my roommateÃ¢ÂÂs girlfriend told us that her parents would look after her for us for a few months while we looked for a place for her. Snow spent 2 1/2 month living in a different house with 2 other dogs. However, just recently they told us that she was starting to not get along with their dogs and we would need to take her back. We now have her back but it is only a matter of time before our landlord finds out again. I want to find a good place for her where she can stay and have a home for the rest of her life. That place canÃ¢ÂÂt be with me right now because I am in my senior year of college and will be moving.